Five days alone with Michael Swart, four tube amps, flyers, cards, a laptop scrolling photos of my wife removing a tube with my cat staring in disbelief, combined with enough vintage guitars to send a guitar junkie into overdose makes for an amusing something...

Let's just say there wasn't a dull moment to be found, even in the next to the last row on our overloaded 737.   Yes, the Flight Attendant did spill a tankard of Grape Ape in my lap, but at least the ADHD child in the adjacent row didn't wail in dismay at the loss (that would come later, around the 3rd hour - Actually, the tike was amused for the first time since takeoff). 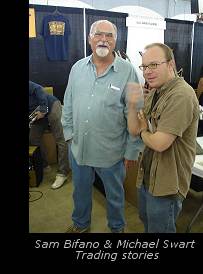 My first thought at the show was dismay as I noticed a Fender Mustang fetching a price tag that mirrored the Gross National Product of a small country, this the very same guitar that an ex-girlfriend pawned while I was out of town.  Ok, it WILL get better...

And it did.  What a great show.  We met some amazing people, including a handfull of classic characters, some hot guitarists,  and some new dealer interest.  We had a helluva time, even factoring in the Rental Carjacking and the loss of all faculties of reason at 4am in downtown Dallas.

Some of the Gear Page contingent dropped by to give the amps a whirl.  Nice guys and some good players, too.  A number of attendees were bowled over by the quality of the amps.   Nice bantering with the guys from Northwoods Guitars across the way, who fell in love with the whole line.   Doubt anyone could meet a nicer guy than Scott Johnson.   Mike from The Trading Musician in Seattle couldnt get enough and did his best attempt to leave the show with everything plugged in the Swart booth. 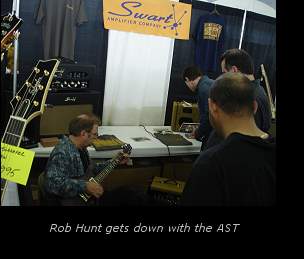 The most memorable cast of characters had to have been the crew brought over by local Sam Bifano.    Every time we turned around, ole Sam was leading someone else over to "hear these damn Swart Amps."  Local blues king, Rob Hunt, ended up drawing a big crowd, even with a few video cameras coming into play.  Rob drove the hell out of the AST with a PRS loaner from Marc's Guitars.   Ditto with Jr Clark, with PRS Guitars, another who let it all go on the Swart valves.

But my favorite moment of the show might just have been at the end of a long Saturday, when ole Sam came wandering back with two young, eager guitar players.  Sam had a big monster grin on his face, as he winked and said, "Give these two old timers a go on those Swart Amps."    Turns out, within minutes, there was a small crowd of onlookers, every single one with a huge smile plastered on his or her face.   It's nice to witness unbridled, un-jaded, total enthusiasm and love for music and playing, and that's EXACTLY what was going on while Trace Bivens and Cody Angel were lighting up the Swart Booth with a helluva teen angst rendition of Peter Gunn, of all things.  Trace was on lead via the new Swart Space Tone Reverb while ole Cody was knocking out the rhythm via the AST. 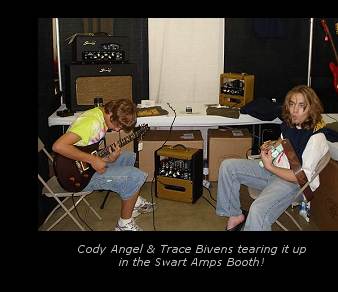 Man, it just felt REAL.  I think every person within earshot was reminded of what it was  like to be a teen and playing in front of a group like this.  Man, they were eatin' it up!   And ole Trace and Cody kept on going, trading fours and letting it all hang out.  Pretty soon, I heard the poor woman over the PA system calling for all "amplifiers to please turn off"   heh....  Reminded me of that infamous "Turn that damn guitar DOOOWWWN" line on Hendrix's Electric Ladyland during Voodoo Child (Slight Return).

I heard some great guitar players that weekend, but I dont think any topped that moment.

Thanks to all the guys that stopped by the both, from our dealers to all the Swart faithful.  We made some new friends, connected with some old, and had a great time!

And thank to Trace Bivens (16yrs old)) and Cody Angel (13 yrs old) for coming by and making our day.  I'm going to be looking for you guys in the future!