If anyone saw Paul Leary and the Butthole Surfers in the heyday of indie innocent, before THE BIG FALL, aka pre-NEVERMIND, they probably came away with a renewed understanding of sonic dementia, Über beauty noise, and wall of sideways sound akin to an ape having a seizure with a jackhammer in a corrugated tin pipe.

Paul Leary was that Ape...

but damn if he wasn't an intelligent ape, surely better than most others welding instruments with plugs, and undoubtedly one of the most innovative guitarists of this generation, influencing a host of names.  Of course, we're not talking traditional, stodgy comparisons of axe welding grandeur.

Let's just say, Paul is not Eric Johnson crafting a lead via his tweaked Strat.  One gets the feeling that Paul doesn't much like hanging within the Guitar Hero Box, nor the confines of a "song" as most know it.  While Eric makes his Strat sound like a Strat, albeit a well-played one, Paul makes his Silvertone Dan Electro sound like the mating call of 2000 Chinese Geese being rotated in a bone hollow cement mixer.

Some dont get it - they don't SEE.   But there are not many that can do this; it calls for the special powers of The Mentalist and an occasional dose of proper substances to get outside the framework.  It also helps to have gear that can bring you every tone in the next solar system.

I first saw him play in the 80s and came away so impressed, I refused to ride with my cohorts back to Wrightsville Beach, NC.  Instead, I wandered around Morgan Creek woods at 3am, turning the key guitar line of "Graveyard" over and over within my skull, until sitting atop Elephant Rock I decided to push myself into the creek to live with the Mud Cats.  Paul will do that to you..


Paul called for a duo of custom covered , red & silver sparkle ASTs that he plays via a stereo pedal for full effect.  Needless to say, Leary is often looking for the "difference" in gear.


After reading that classic "volume at zero, reverb all the way up" line, I got curious and hit my own AST.  Damn if ole Leary wasn't right!  And it sounded just like a tone he might be after, too.  I was banging my Reverend Jetstream like a gong when my poor wife came down, wondering if I had tapped into the box wine spigot....

My next goal is to try to get Leary to send a few MP3s for us to get online here.  Stay tuned to Swart News as I'm sure you'll be hearing more from Austin and beyond...

The one and only Paul Leary with his twin ASTs, pedal board, & bevy of vintage classics lined up.
All photos on this page click to full versions ~ Photos by the captivating, Formica Iglesia. 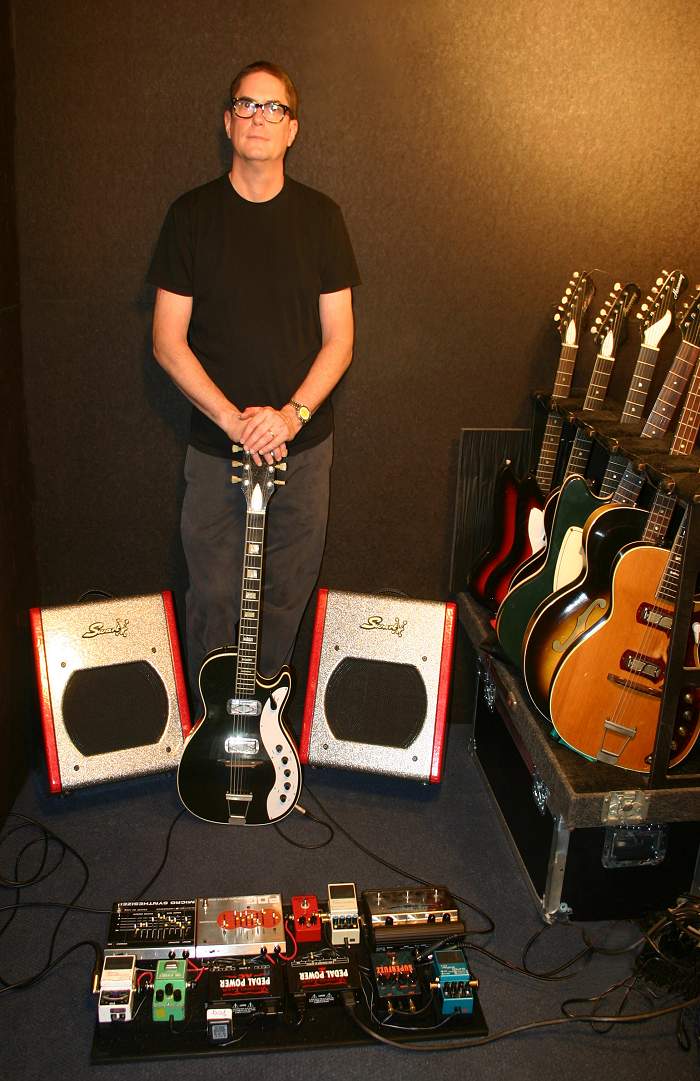