The legendary Dallas Rangemaster with all its history and accolades was actually not a pedal at all, but a stand-alone box that one could plug into. You would see them on the amp or in the studio. The effect's box was made famous by none other than Eric Clapton and a host of others -even Queen's early sound was attributed here. If talking about the Rangemaster, one has to mention the vintage OC44, a germanium p-n-p transistor, and the key device to retaining this excellent tone with boost. This version of the OC44 is the preferred "glass" version. The design of this piece gives the pedal a boost that is far less "transistory" in nature, souding more round and tube-like; this is no small feat with a so-called treble booster 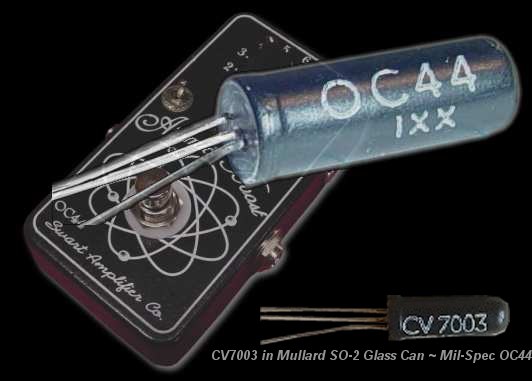 considering the nature of the beast. It is really in the mids and treble region where so much of the problem lies with transistor components as the tone is lost, replaced with leached harmonics and lack of dimension. All to often, transistor devices that bring boost or more distortion come at a sacrifice of this tone which is why tube amplification has always been at the high end of the amplification chain. This is what makes the Swart Atomic Boost with its integral, gain matched, vintage NOS OC44 so important; it brings the boost WITH tone and soul.

Mullard also was supplying the SO-2 Glass Can style for Military use, calling it the CV7003, which were really the OC44 but tested to much higher spec, in the SAME glass can as OC44. Swart Amplifier Co ONLY uses the original vintage style "Mullard SO-2 glass can" CV7003, the military spec OC44, in all their 2015 Atomic Boost pedals. And just like the original, it's a hand wired, point to point component. Unlike the original, the Atomic Boost has better quality control and parts selection.